What an absolute gift!! I have spent today in quiet and meditation with my colleagues from the South West Uniting churches. Ruth Nelson led us with the theme of 'Hunger and Thirst'. It was a day of tying up loose ends for me. Life has been so busy lately that some of my reflection and pondering has been left half baked. A time of quiet and stillness allowed me to take stock and bring closure in a few areas.

I decided to spend some time playing with mandalas. I had deliberately taken my chalks with me, as I had watched so many people in my workshops achieve some beautiful effects with them. I started letting the colours speak and found myself creating a coloured, off-centre interior surrounded by a thick, white band. The colours then flowed beyond the edge of the circle to the periphery. This somehow symbolized for me the struggle between what is happening in my inner world and how this translates in my outer world. It started being quite a stark distinction between the two, but the more I worked the chalk with my fingers the more the white band began to disappear (and the messier I got!). 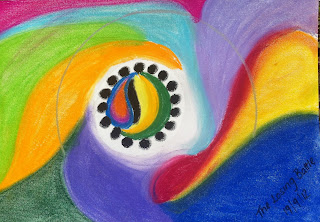 I found the process very liberating and discovered that this is actually what is happening in life - the distinction is becoming less and less. I titled my mandala 'The Losing Battle'. I think this comes out of feeling that living an authentic life has been a bit like a battle. The more I decide to stop fighting, the easier it becomes to have integrity and just be me. This is a very fresh mandala - so I haven't spent much time discovering its meaning at this stage, but I am happy to share with you my little burst of colour. If you want to know more about mandalas let me know. If you'd like to get a group together, I could come and do an introductory workshop with you.
Posted by Cathie Lambert at 19:16