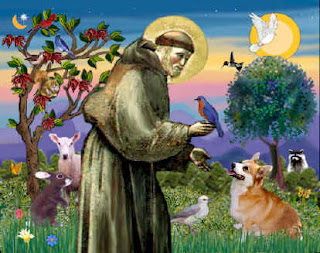 Today is the Feast of St. Francis of Assisi (1182-1226) who has become well known for how he could communicate with animals and felt at one with all creation. One story, that was first recorded by Thomas of Celano during the 13th century is that of St Francis preaching to the birds.

The story tells how Francis and his companions were making a trip through the Spoleto Valley near the town of Bevagna. Francis saw a great number of birds of all varieties. Swept up in the moment, Francis left his friends in the road and ran after the birds, who patiently waited for him. He greeted them in his usual way, expecting them to scurry off into the air as he spoke. But they did not move.

Filled with awe, he asked them if they would stay awhile and listen to the Word of God. He said to them: “My brother and sister birds, you should praise your Creator and always love him: He gave you feathers for clothes, wings to fly and all other things that you need. It is God who made you noble among all creatures, making your home in thin, pure air. Without sowing or reaping, you receive God’s guidance and protection.”

At this the birds began to spread their wings, stretch their necks and gaze at Francis, rejoicing and praising God in a wonderful way according to their nature. Francis then walked right through the middle of them, turned around and came back, touching their heads and bodies with his tunic.Then he gave them his blessing, making the sign of the cross over them. At that they flew off and Francis, rejoicing and giving thanks to God, went on his way.

St Francis of Assisi had an understanding that God's presence was in all of creation. Today, I heard someone tell a story of how a bird had brought great comfort and guidance in their life. A true messenger of God. I have experienced, more than once, a presence in birds that have lingered in my path longer than seems natural. A friendly kookaburra often flies close to me when I am at Margaret River church. It perches on the fence as I get my things out of the car and then flies in front of me as I leave the carpark. This, now familiar, friend arrived in my life at a significant time and I have no doubt of how its presence is to reassure me.

During my Ordination service in 2009, an inquisitive willy wagtail came into the chapel and joined the congregation at a crucial moment during the service. I was very aware of its presence and the reason it was there with us. I may not be able to talk with the animals the way Francis did, but I can certainly understand the significance he placed upon the wider creation. I think sometimes we are just too busy to notice the world around us screaming out trying to get our attention.
Posted by Cathie Lambert at 23:24