On Sunsets and Seeing

This morning I had the privilege of preaching at the opening of Presbytery and the Induction of a friend and colleague into a new ministry position. As part of my reflection I referred to three different ways of seeing a sunset, as described by Richard Rohr in his book The Naked Now. He talks of three different people seeing the sunset with three different eyes.

The first eye is what we see, hear, smell and feel. The second eye is how our knowledge of the world makes sense of it and explains it. The third eye is that which stands in awe and has a deep realisation of the connectedness with all things. My message, in a nutshell, was the need for us to see with the third eye.

Well, on the way home I was able to practice what I had preached. Just out of Bunbury, about an hour from home, the sun began to sink in the sky. At the same time, I began to drive through thousands of flying ants. This continued for at least half an hour, well and truly long enough to see with all three eyes. My first eye felt the need to adjust my sun visor and continually adjust my position to avoid being blinded by the bright sun. My windscreen filled with the scars of bugs that didn't manage to dodge my car. I noticed the ants that had landed on the road making the bitumen seem like it was alive.

My second eye considered the temperature of the day, the changing of the seasons and the impact this had on the life cycle of these ants. I thought about the sheer size of their community and remembered days walking home through similar swarms. I was thankful that this time I was in a car.

But, my third eye enjoyed the experience. The ants seemed to dance through the air. I considered why this surge of life had chosen this time and this place to emerge. I imagined how vulnerable each little ant may feel, perhaps knowing such freedom for the first time. I noticed some of them get caught in webs on road signs. I wondered about the web of life and how we are part of it. The sun dominated and was almost painful. In all its beauty, there was also discomfort and danger. Isn't this how the paradox of life is?

When it almost became unbearable and my eyes were blinded by the intensity and brightness, the sun faded beyond the horizon. I could see again. The flickering display of ants dispersed and it was over. 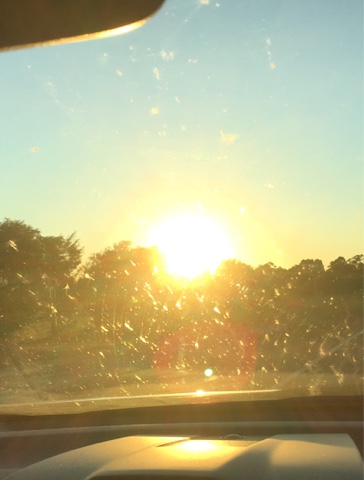