After the hustle and bustle of Jerusalem, Galilee was a breath of fresh air. After the frenzy of tourists trying to touch and kiss the sacred spots of Jesus’ life, walking by the calm waters of Galilee I could actually imagine Jesus loving this place. After constantly dodging crowds of people down narrow lane ways, I needed a “lonely place” to sit and be still for a while.

Tabgha was just the place. A ten minute drive from the holiday town of Tiberias, the roads thinned, the crowds dispersed and I felt my body starting to relax before we even arrived. We turned into the parking area only to discover two large tour buses. My heart sank. So much for Jesus’ lonely place. Were the crowds following us too? 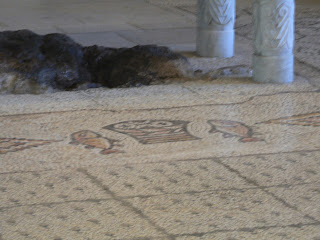 We went inside the old church and saw the famous Byzantine loaves and fishes mosaic just before the altar. And there it was, just like the other churches we had visited in Jerusalem, the stone where it happened right under the altar. This was supposedly the place where Jesus blessed the loaves and fishes. But, no hoards of people madly jostling to touch it or kiss it – it was just there. We spent a little time in the church allowing the last, straggling tourists from the buses to move on ahead of us and then found a path leading down to the shore of the Sea of Galilee. 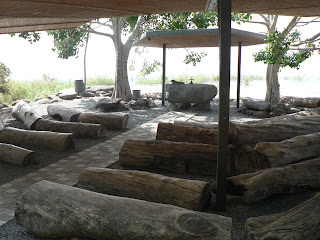 It was so peaceful and serene, I could understand why Jesus would retreat to here. Down at the shore was a simple, but stunning outdoor chapel. We had caught up with the stragglers, but as is often the case they didn’t have long before the bus would be leaving and then we were alone. I sat listening to the water lapping on the beach and imagined Jesus sitting here taking a few deep breaths while he was able.

Neville, our “tour guide”, suggested that this would be a great spot for our daily meditation. This had become our practice each day, to spend about 45 minutes reflecting and meditating. In Jerusalem, we had found a semi-quiet corner in the courtyard of our guest house. In Galilee, there would be plenty of places along the way. Today it was Tabgha. 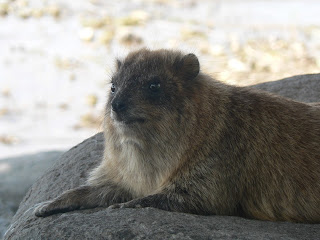 As we were arranging ourselves closer together, a small critter jumped up on the altar table. Someone else wanted to join us for the morning. Our meditation was delayed by the photo opportunity that now presented itself, but once we began the critter became my focal point. It stayed perfectly still for the whole 30 minutes we meditated. More still than I was capable of being on a hard log. Neville often ended our meditation with a simple “amen”, but today he said, “All God’s creatures long for fulfillment.” Then the next tour bus of people arrived.

The little critter, we discovered later, was a hyrax (a wild rock rabbit). The hyrax is mentioned four times in the Bible. Two of these are found in, in Deuteronomy 14: 7 and Leviticus 11:5. These are both eating laws instructing the Jewish people not to eat the hyrax even though it chews cud, because it has a divided hoof. The other two instances are in Proverbs 30: 26 and Psalm 104:18. These instances describe the hyrax as a wise, trusting creature that lives amongst the crags of the rocks. 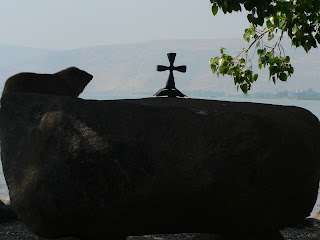 All I have to offer is the little I have.  It may not be much, but once it is offered it can become more than enough. On leaving Tabgha I found a lovely postcard of the loaves and fishes mosaic. I didn’t buy it for the picture of the mosaic, however, it was the saying that inspired me. “Love is like Five loaves of Bread and Two Fish. Always too little until you start giving it away."